After a break without joint races, the first highlight in the wild month of May was the Erzgebirgsrundfahrt. Often referred to as the “Liège-Bastogne-Liège of the German Bundesliga”, this race has classic status. The Pushbikers approached the Erzegbirgsrundfahrt with a lot of motivation, but also with a bit of a stomachache, as we have not yet managed a podium in the German Cycling Bundesliga. That should be the new goal, and so Patrick, Paul, Alex, Daniel, Philip, Tim, Max and Raphael wanted to do everything they could to take this new step.

Alexander Evans joined the team for the first time. After several months off racing, Alex put in a good performance on his debut, and the rest of the team also presented themselves strongly and cohesively as a unit.

In a very offensive race, the Pushbikers with Alex, Paul, Max and Patrick remained present until the final, before Patrick was able to break away with two companions. The decision was made in the final climb: only Jan Hugger (Team Lotto Kernhaus) was faster here and relegated Patrick to second place. For us it was nevertheless a clear sign of the mountain fraction, which gives us self-confidence for the coming races. And in a truly honest race, it was an “absolutely brilliant moment when we saw Patrick cross the finish line in second place,” said Sporting Director Rupert Hödlmoser. The podium finish was complemented by 14th place for Alexander Evans, as well as another three Pushbikers in the top 35.

„This race is a special one for me, you could almost call it a home race. Accordingly, I inspected the course in advance to minimise any unpleasant surprises. “

„I tried to ride a bit differently than usual. I didn’t have any pressure for results and in the end I found myself in the breakaway group to play my cards right. I admit that several times during the race I thought: “Who put me in here?”…  In the end it was a good podium, but I’m never happy if I don’t win 🙂 .“

Five days later, the next Bundesliga race in southern Germany. On a relatively flat course, Filippo Fortin takes heart and rides out front with a small but strong group. A rare moment for Fortin as a sprinter with World Tour experience. The breakaway group was practically only put back at the finish – Filippo, however, managed to ride a long sprint so that he was only just overrun from behind shortly before the finish line. So it was another second place for the Pushbikers behind Tom Lindner (P&S Benotti) after 3:07:45. “Absolutely awesome, such international flair is good for the Bundesliga”, Patrick Reissig was happy after the race. Tim Wollenberg finished in 12th place.

The Bundesliga races have a character all of their own – and are difficult to compare with other race formats. Even for our experienced Italians, it’s a completely new experience. The importance of the Bundesliga is particularly high for the German KT scene and therefore also for the Maloja Pushbikers a direction in which we are currently investing. This is another reason why we as a team can be proud of the two podium finishes at the two May races, both of which were also very good team performances.

The fact that we were able to follow up on the result of the Erzgebirgsrundfahrt was really good for the team. So an unusual performance can also lead to the goal. And with a twinkle in his eye, Paul Rudys adds: “Pippo was able to make new friends, especially in Schweigen, where he told some riders in a friendly way in Italian what he thought of their chaotic way of riding in the peloton”.

From the Bundesliga race, Filippo, Liam, Philip, Paul, Alex and Patrick went straight on to one of the highlights of this early summer: Rund um Köln. The cycling classic.

The next morning we join the many team buses, are part of a big and traditional German cycling event. Many fans even before the start of the race, many autograph hunters, lots to look at with the other teams like Bora-Hansgrohe, Lotto Soudal, Team DSM, Cofidis, Bikeexchange – Jayco, Alpecin-Fenix. Cologne was once again a very hard race, the three laps around the steep Agathaberg new compared to previous editions. This year the point where the race was largely decided. In the first of the three laps our riders were positioned too far back in the field and missed the connection to the front. So we were far behind our targets.

A statement by Philip Weber remains in our minds for this day: “You can give up at the post office!” Riders and staff are not satisfied with this race, but burying our heads in the sand won’t help, we keep working.

„A day that happens and from which we must learn. Especially because at a level like this, mistakes have immediate and decisive effects. ” 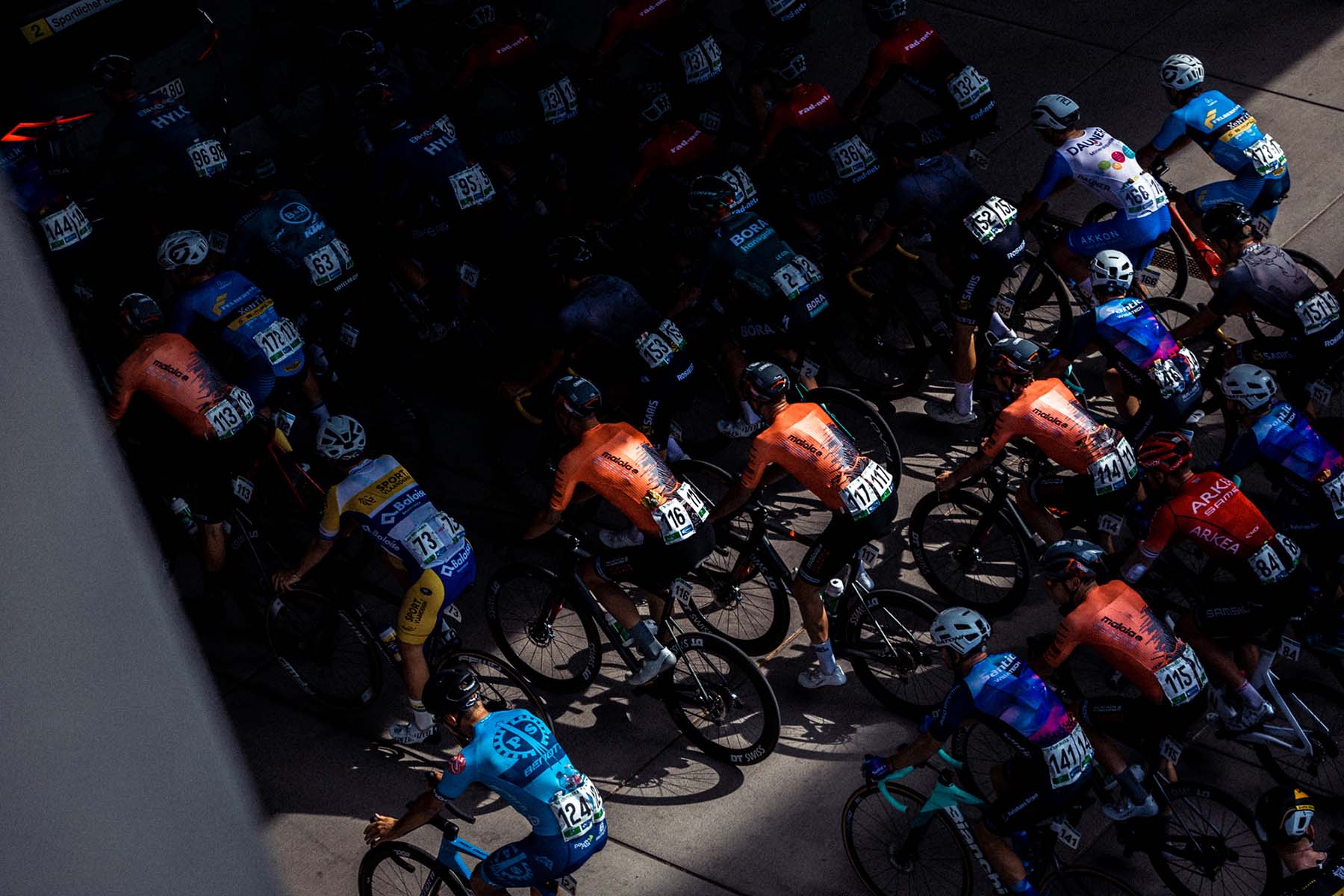 Three days after Cologne, the Pushbikers competed in the UCI 2.2 Tour Fleche de Sud in Luxembourg. A race that we had in our calendar for the first time. In the hectic and very fast first stage, Filippo, Liam, Patrick, Felix, Philip and Tim had to take control of the race at the halfway point to make the sprint possible for Filippo. A, as Rupert Hödlmoser says, “super important, fast decision by the team, really well done”. The result was another podium for Filippo Fortin. To the delight of the whole team, even if they were a little annoyed for a short while about the missed victory, as Pippo was still jumped over on the finish line and was just 10cm short.

In the next stage, a larger group was formed in the last kilometres, in which Patrick Reißig was represented at the front, and thus the second goal of not losing any time was achieved. The following day, the decisive mountain stage took place, where the team was in action for Patrick. The 12th place in the day’s classification meant that Patrick moved up to 9th place in the overall standings.

„Our Italian captain then demonstrated real leadership qualities and team spirit on the third stage – the queen stage. Pippo carefully guided me through the stage, put me in the perfect position with precision at important points and only left my side as the last helper twenty kilometres before the finish..”

„Patrick has become my friend and always gives 100 per cent for me, so it was right to return the favour. It was also with a lot of joy.”

Unfortunately, the team did not achieve its goal of a top 10 result in the final overall classification on the last two stages over 165 and 14o km. On the last day, the Pushbikers with Filippo were able to win the main peloton sprint and thus take 11th place and 15th place in the stage classification with Filippo and Tim, but the risk tactics on the last stage did not pay off as hoped. However, the team spirit of the team is impressive, according to the riders themselves, and is the basis for further success.

Mistakes were made, successes were celebrated. We are looking forward to June with the upcoming races: Oberösterreich Rundfahrt, Rad Bundesliga, German Road Championships and the French Tour du Pays de Montbéliard.