„Achieving success together can be significantly more fulfilling than going through the world alone.“

The Pushbikers are more than just a professional cycling team. We are a community, a group of like-minded people. With the pros at the top, our own young cyclists in the club – and an ever-growing group of cycling enthusiasts who are part of the whole. In one way or another: as a customer in our shop and workshop or as a helper when there’s a need. And most of all: as someone who rides a bike with us. With our fixed Thursday evening rides, we have been able to attract a wonderful group during the summer months, which will certainly bring us all much joy in 2023.

When the suggestion came from the Laureus Sport for Good Foundation to participate in a joint Christmas calendar campaign with the Mercedes Benz branch at Donnersberger Brücke, we didn’t think twice. The advent calendar was to be illuminated only if the electricity was produced by means of a bicycle in the shop window and donations were to be generated for a local programme of the Laureus Sport for Good Foundation. Maloja produced a limited edition cycling jersey, the proceeds of which went to Laureus. For the period from 1 to 24 December, there was a cycling shift every evening, for which anyone could sign up online.

So we went to Munich at the end of November to install three Wiawis Team racing bikes on wheels in the shop window of Mercedes Benz. When you pedal, not only does a small lamp light up above the bike, but every day a different little door of the shop window with a view of the Donnersberger Bridge lights up. Not only the three bikes stayed there, but also “Lude”, our oldtimer of the Pushbikers support vehicles. A place in door number 19 of the Christmas calendar was waiting for him. Elated and curious about the functioning of the campaign, we went home again with one thought: If our car is to shine, then we want to cycle for it. 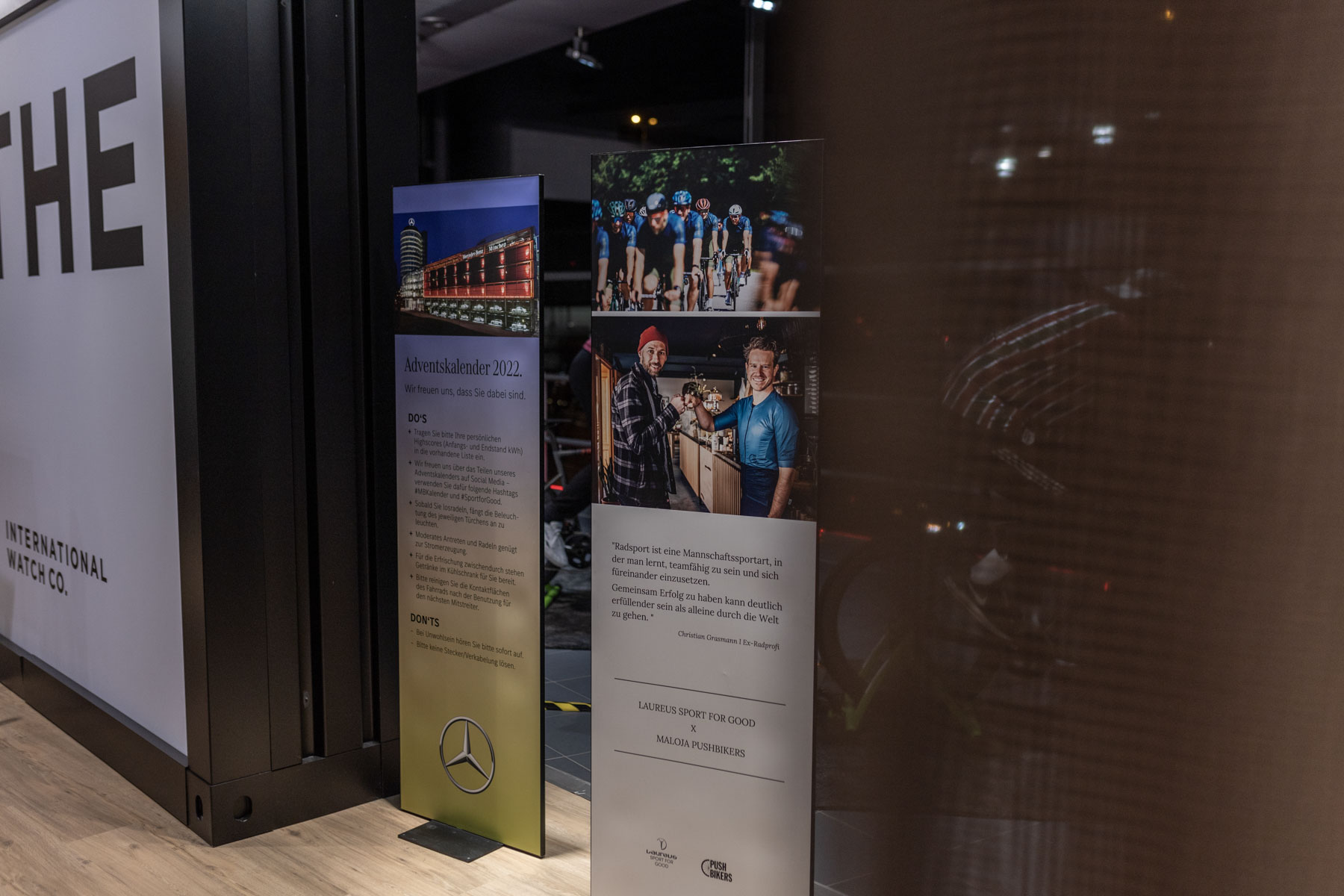 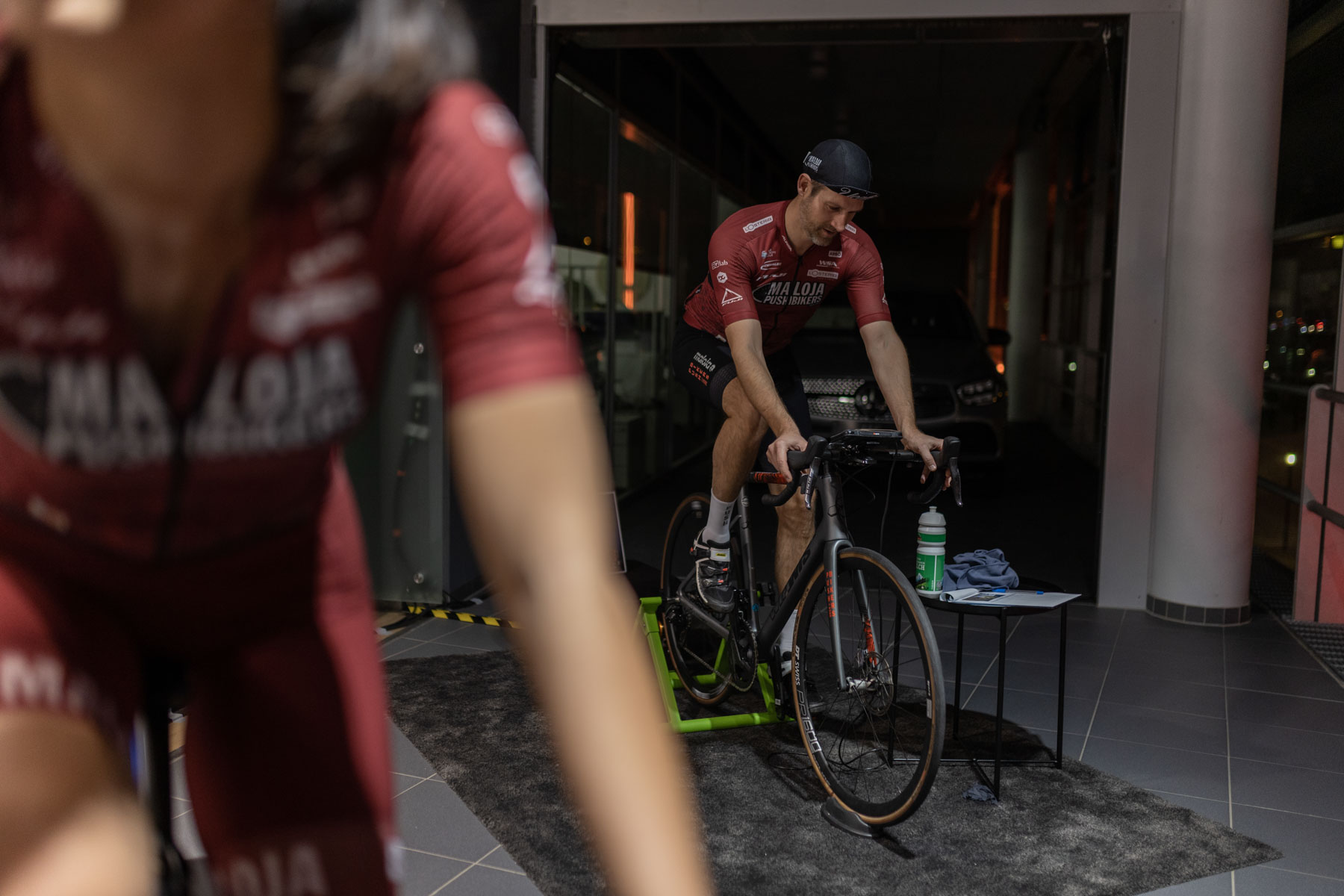 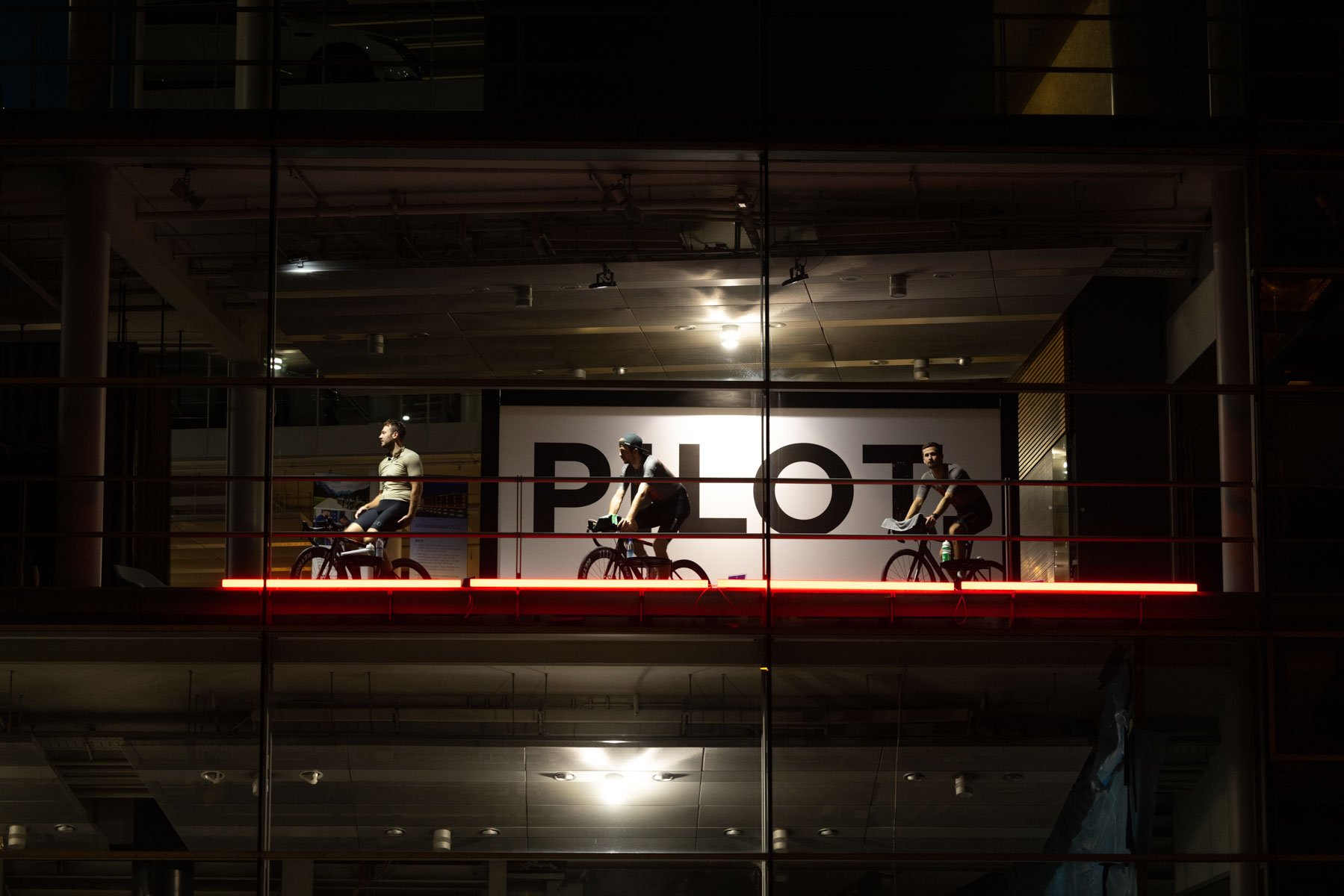 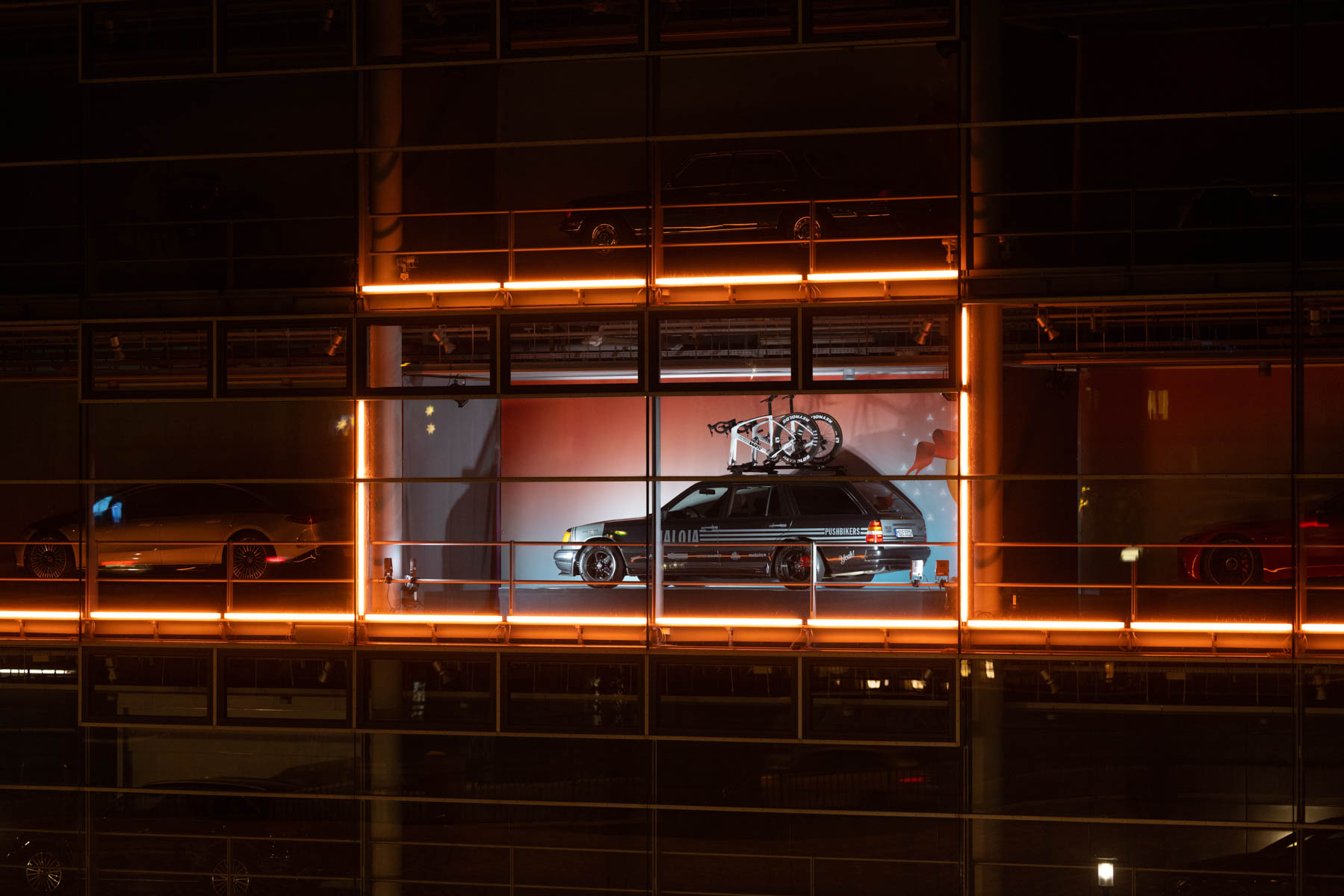 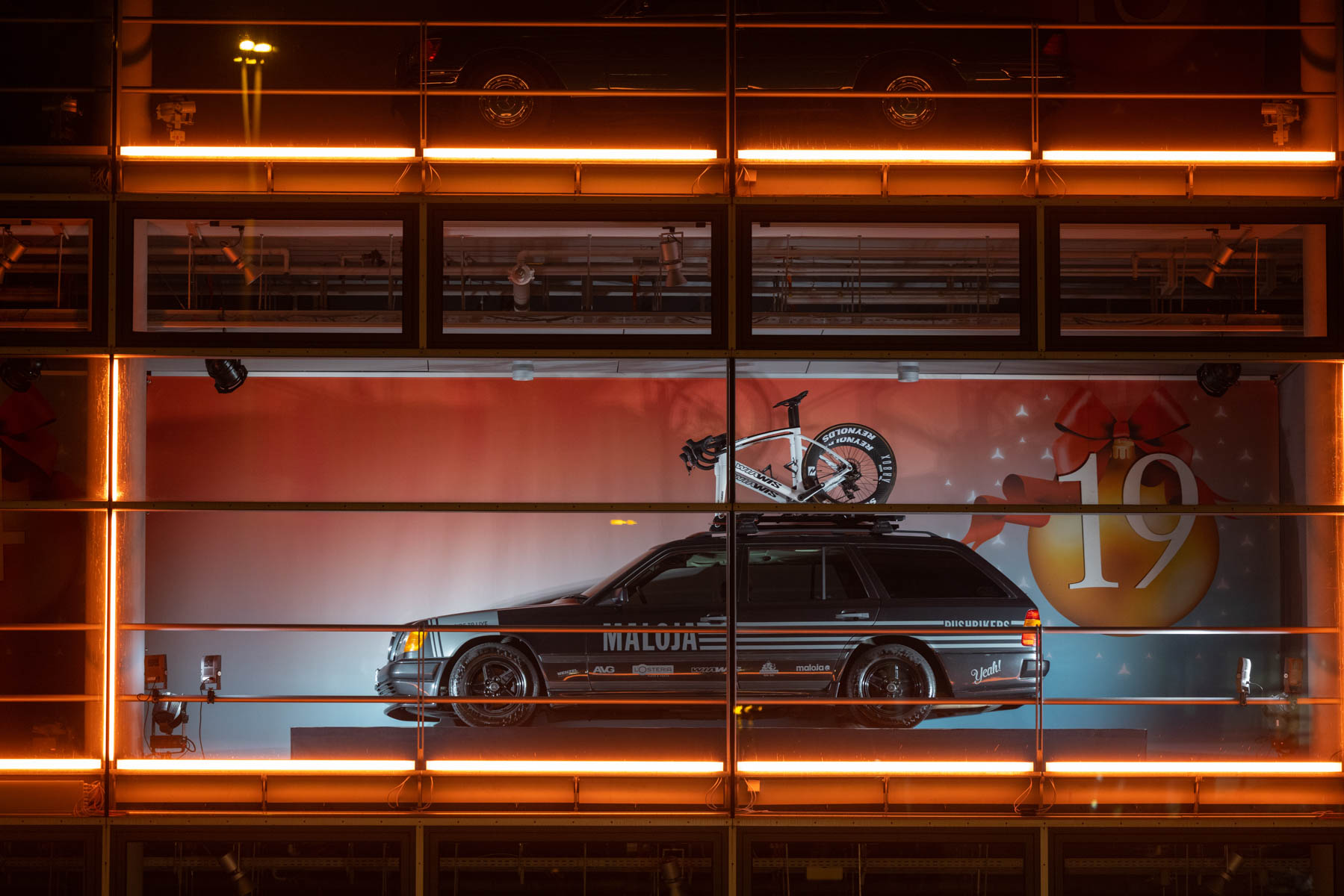 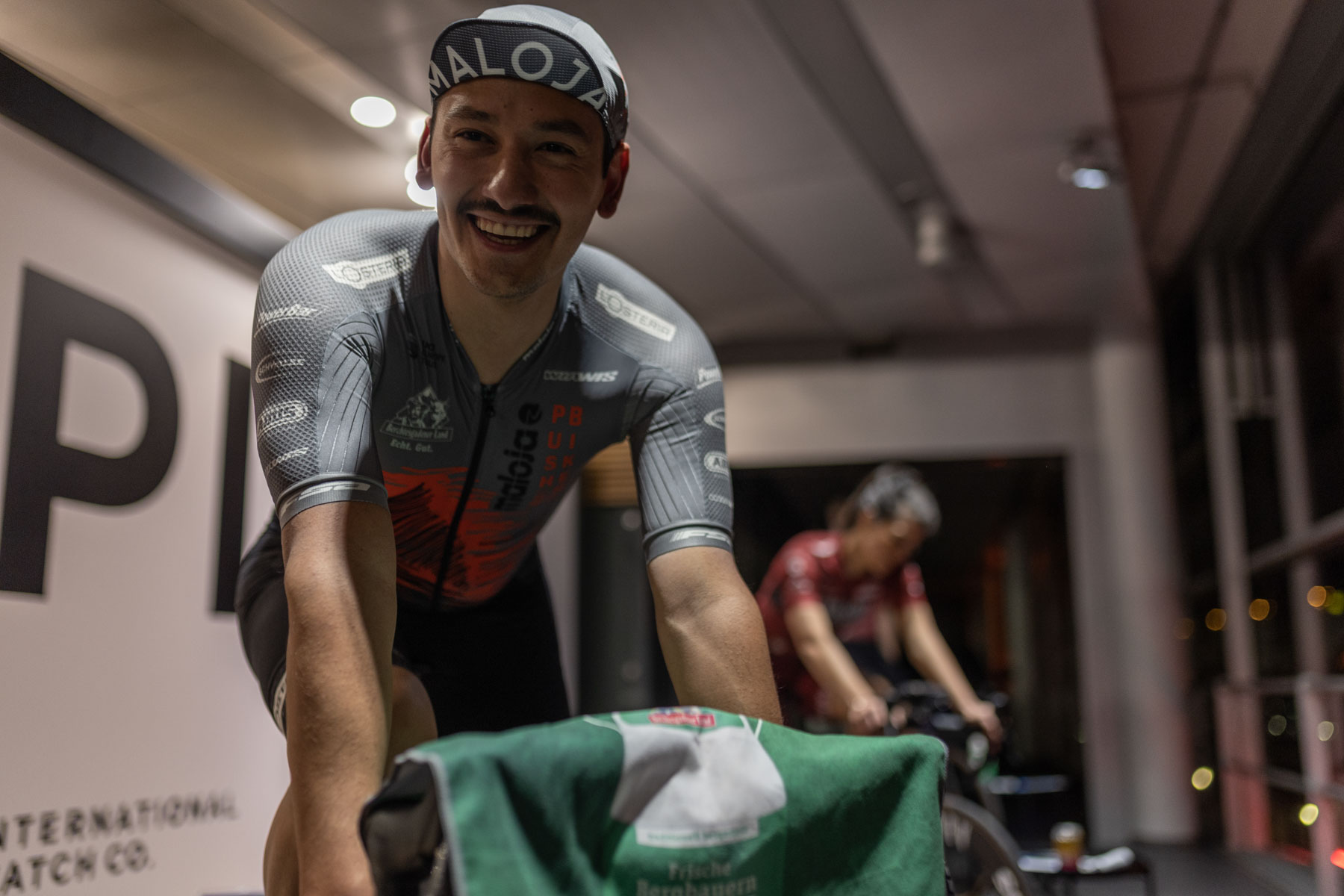 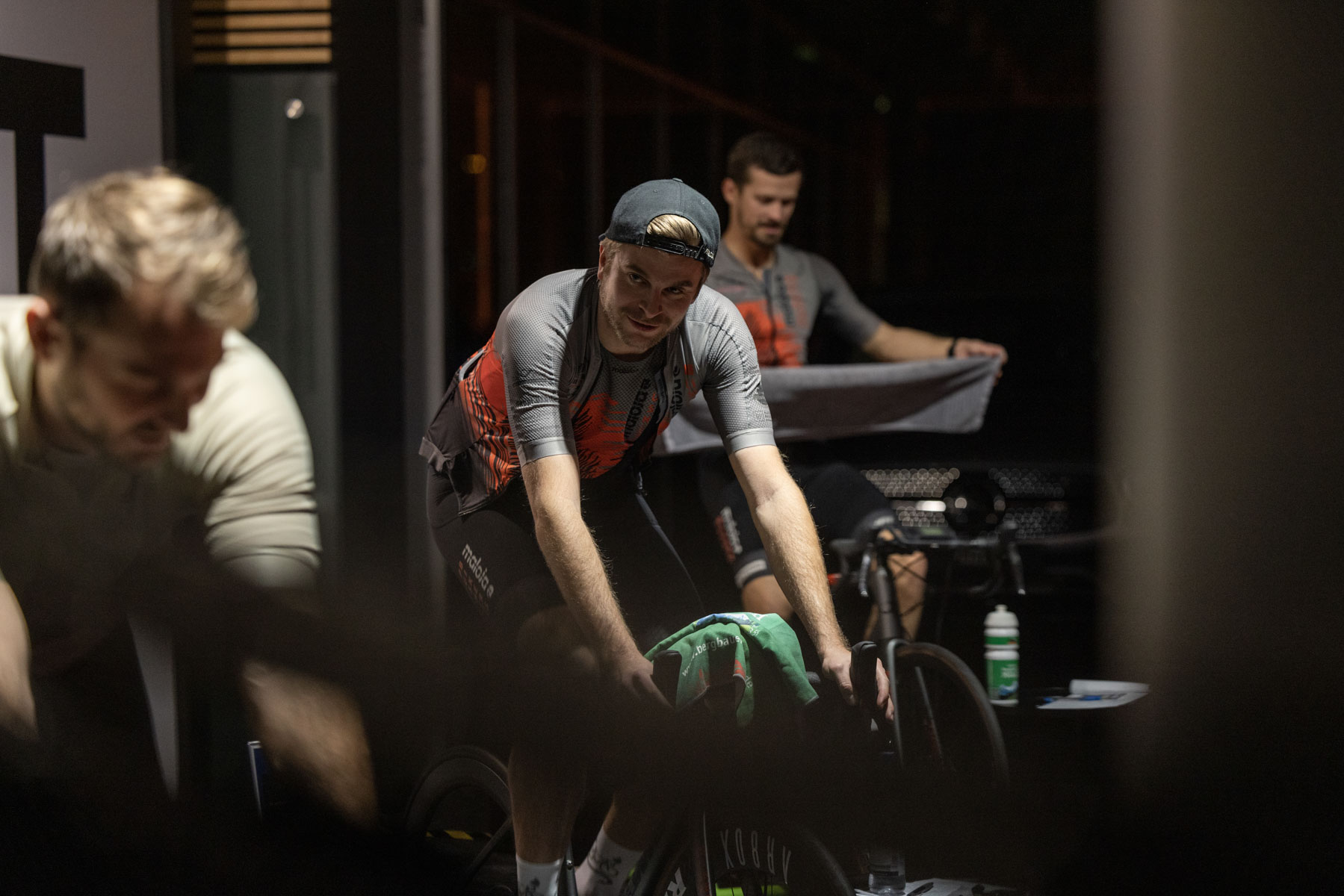 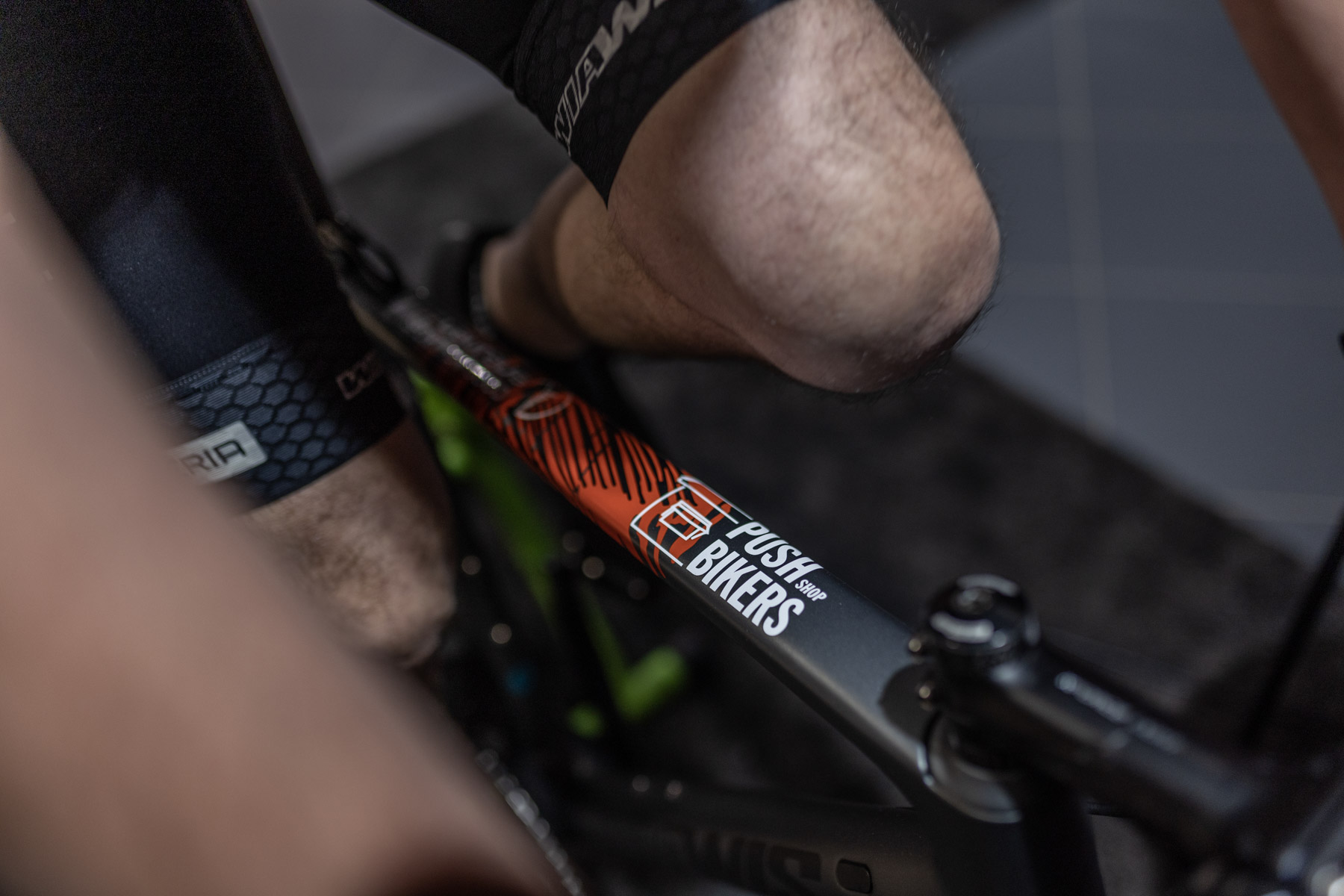 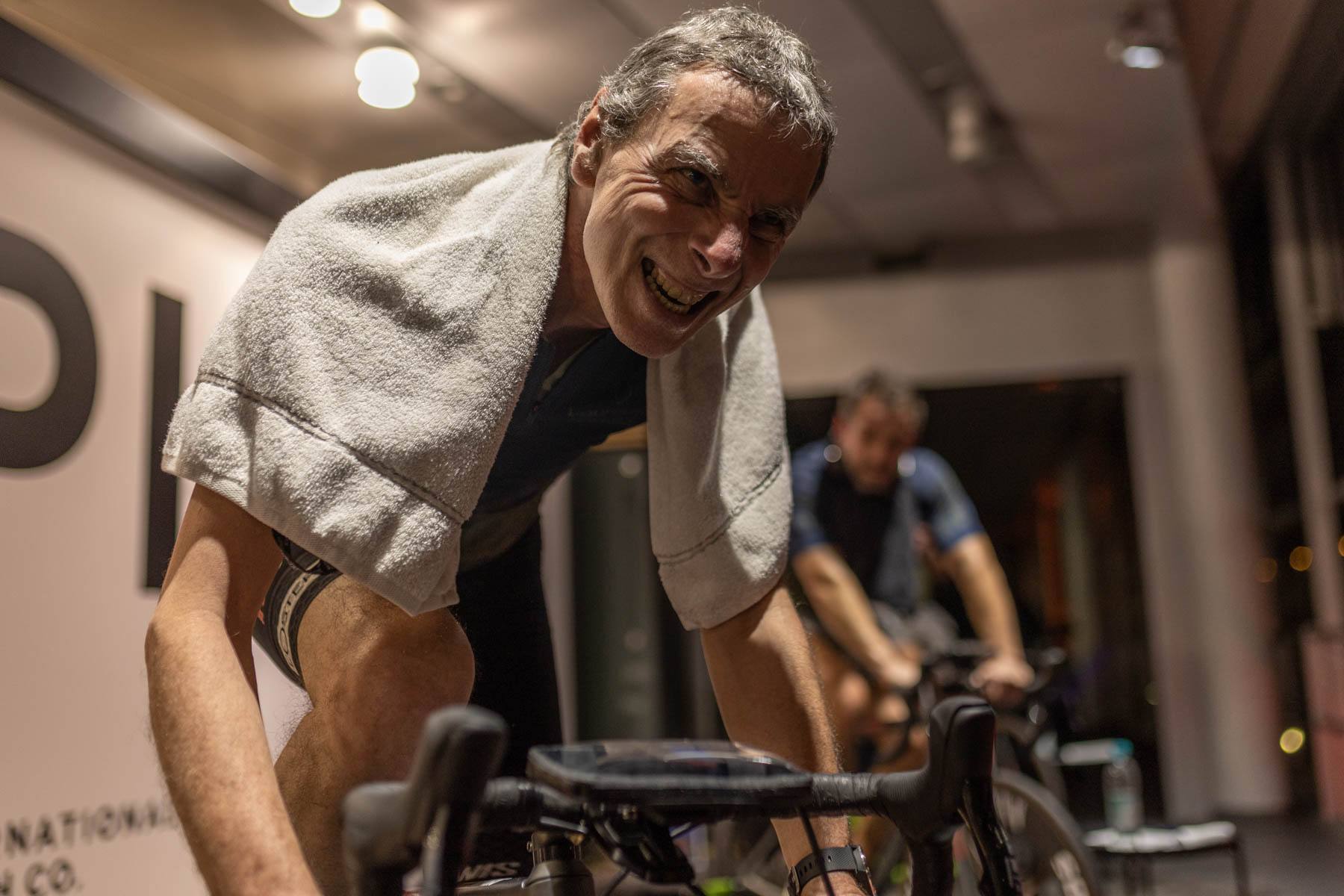 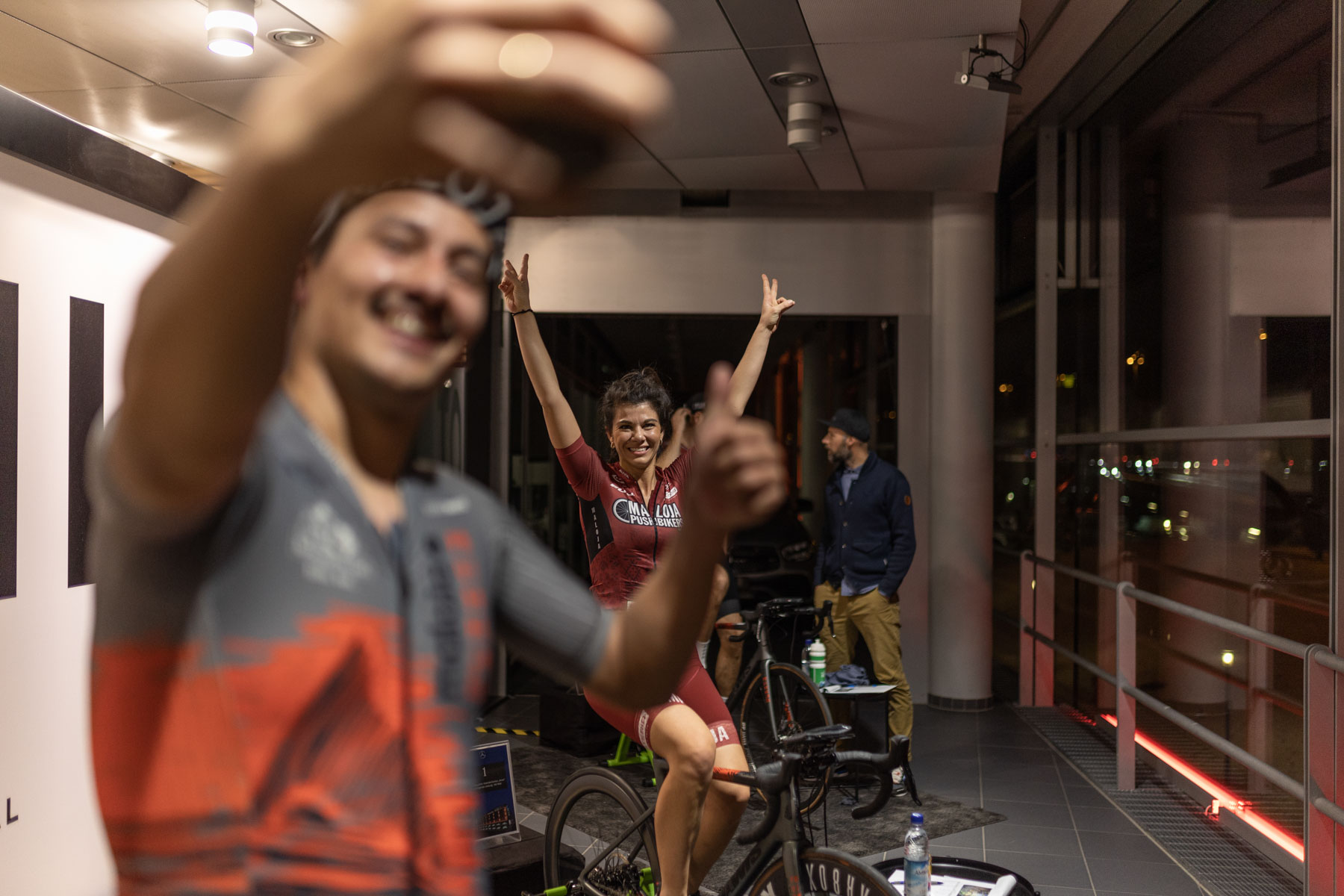 It only took a quick shout-out to the Pushbikers community to set up a plan. The regular bike shift on 19.12 was already fully booked, but we got permission to do a special shift after 8pm. How often do you get the chance to do a bike training session with friends in the middle of Munich, where 160,000 cars pass by every day, surrounded by glass and cars? And so it went, always three pushbikers on the bikes, the rest had time for a chat or a drink at the bar, which stayed open extra late. Each bike produced electricity for a certain part of the lighting around Team Auto Lude. And there shone the black S124 Mercedes with its two racing bikes on the roof rack! Meanwhile, photographer Helge stood outside on the bridge to capture the lighting produced. With his mobile phone he gave instructions when to pedal for the light (“Go”) and when not (“Stop”). The photos were quickly taken, but behind the glass wall the sound of “Goooo” and “Stoooopppp” continued, so pedalling and stopping, pedalling again and so on. Until the three active pushbikers finally realised that Alois just kept on giving the commands to the general amusement. 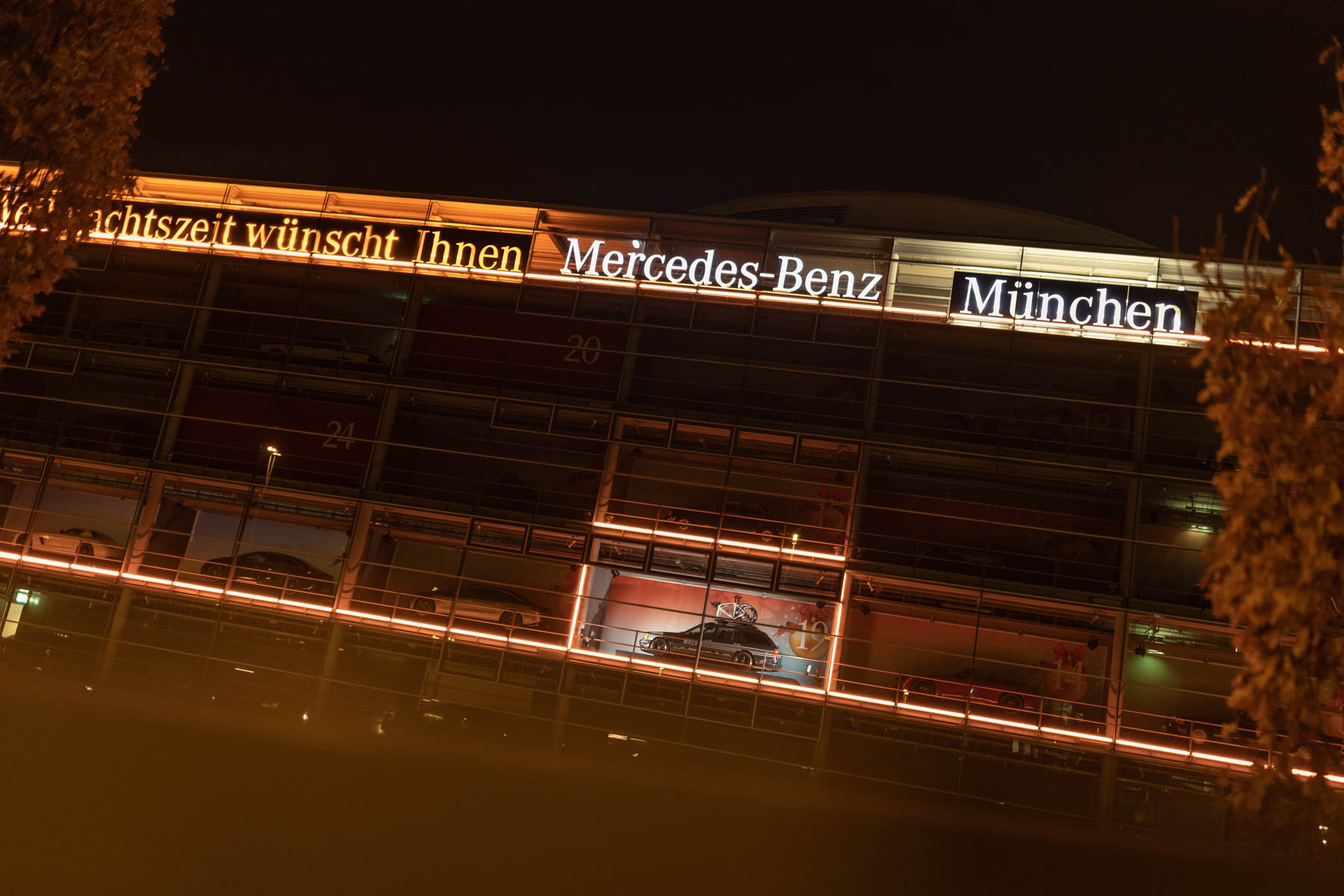 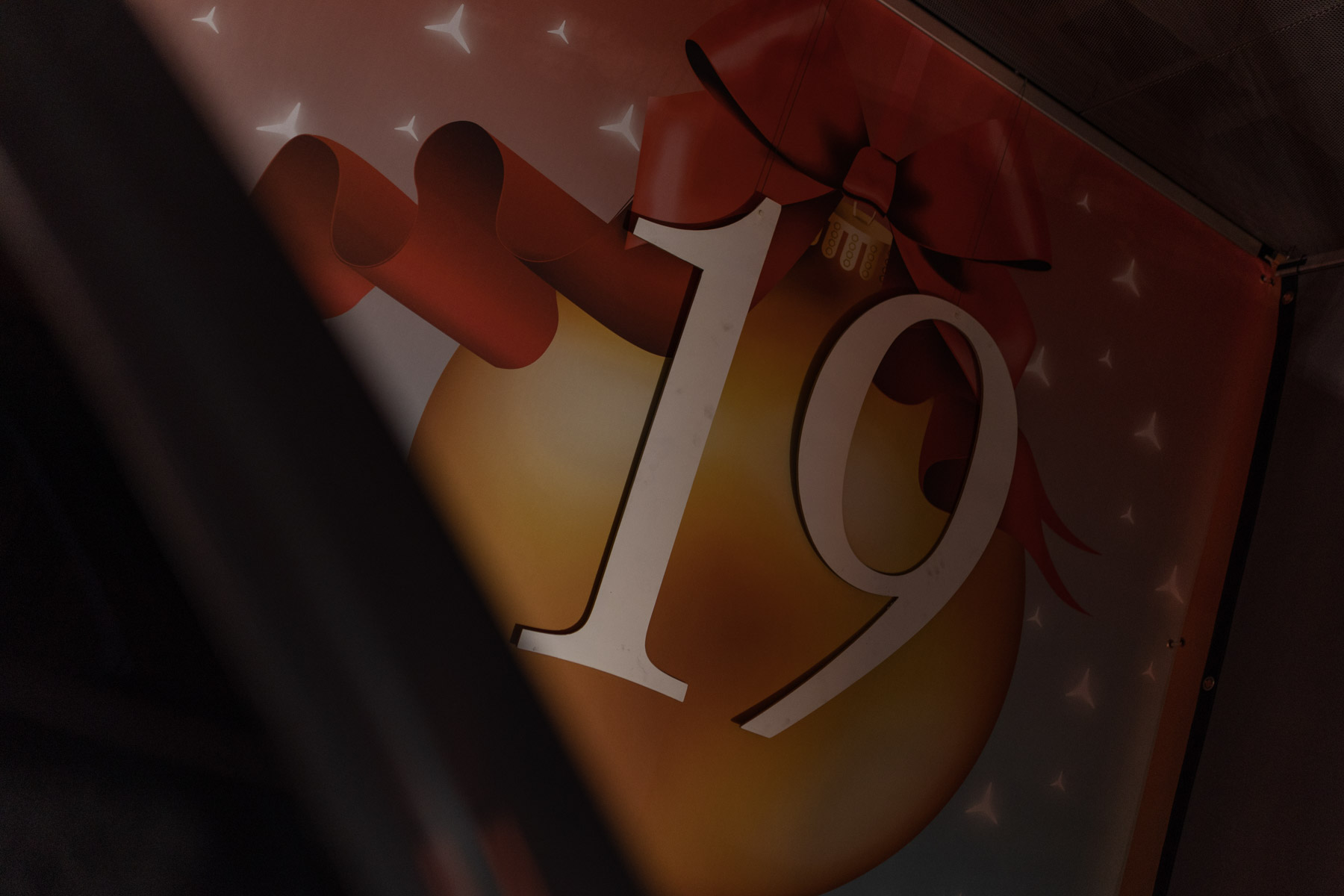 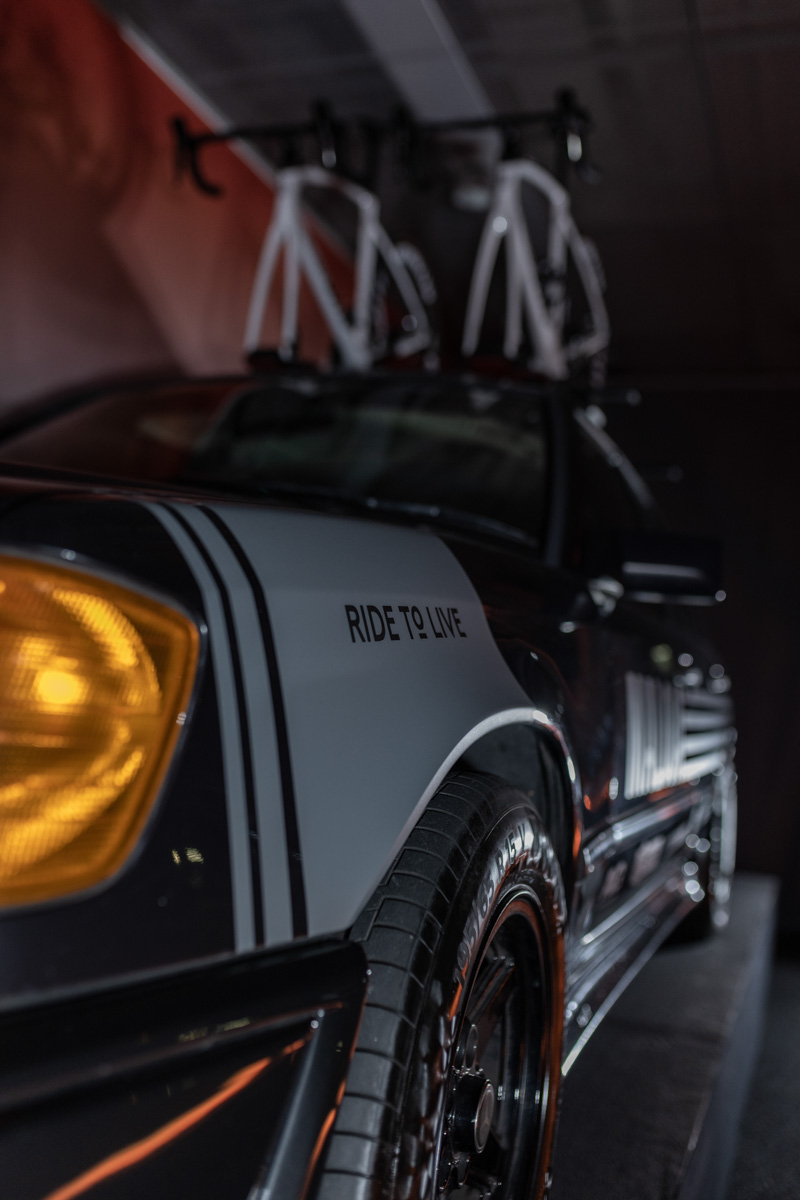 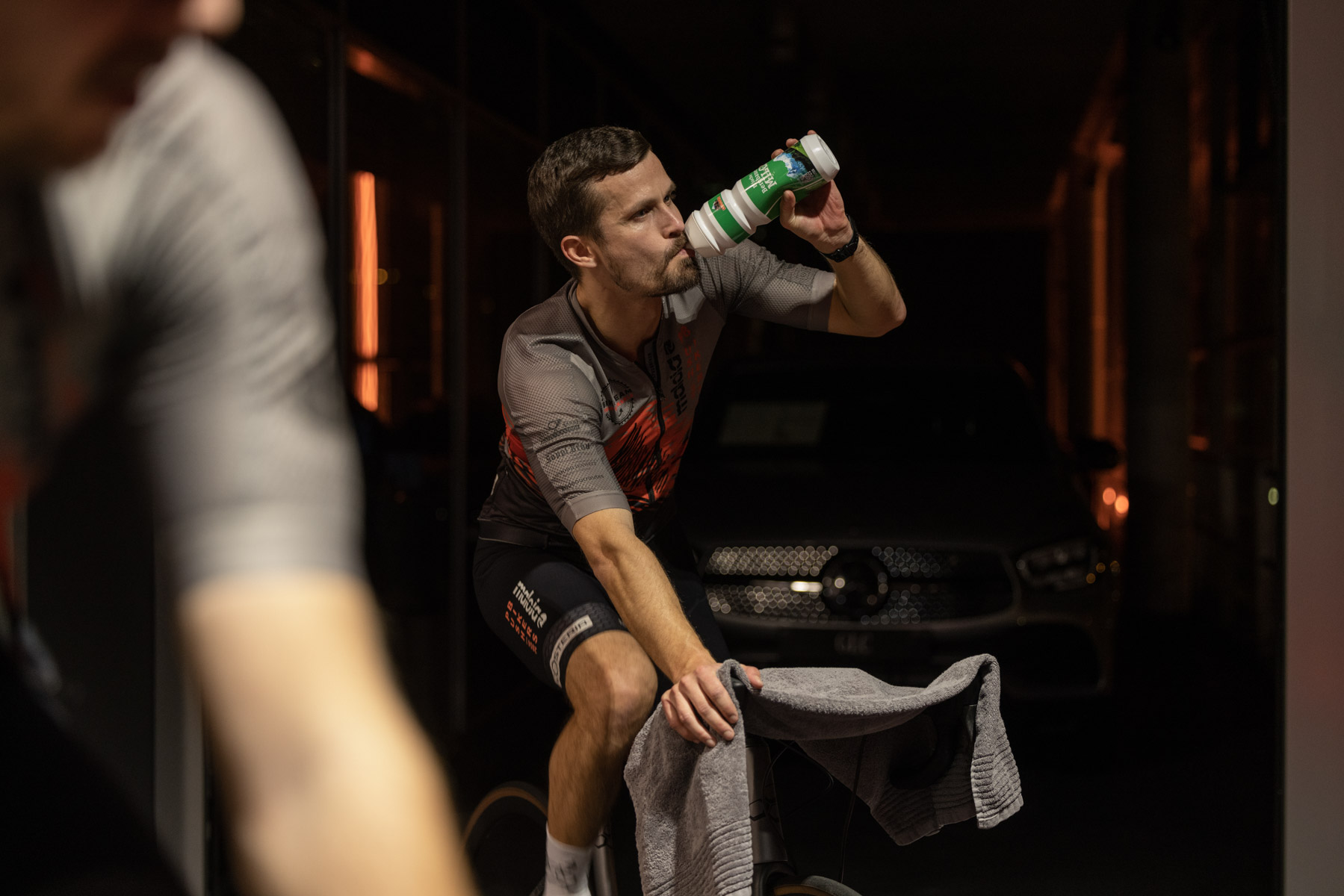 When the strength fades, there still needed to be a drink for everyone and cake at the bar at the end of the evening. There was even a cappucino with the Maloja Pushbikers logo in it that evening. And yes, the men’s hearts beat faster for the shiny cars on display – while Alexandra, as the woman in the bunch, was just excited to ride the roller for the first time.

Lude, it was an honour! And once again a very special evening for the Pushbikers Community. 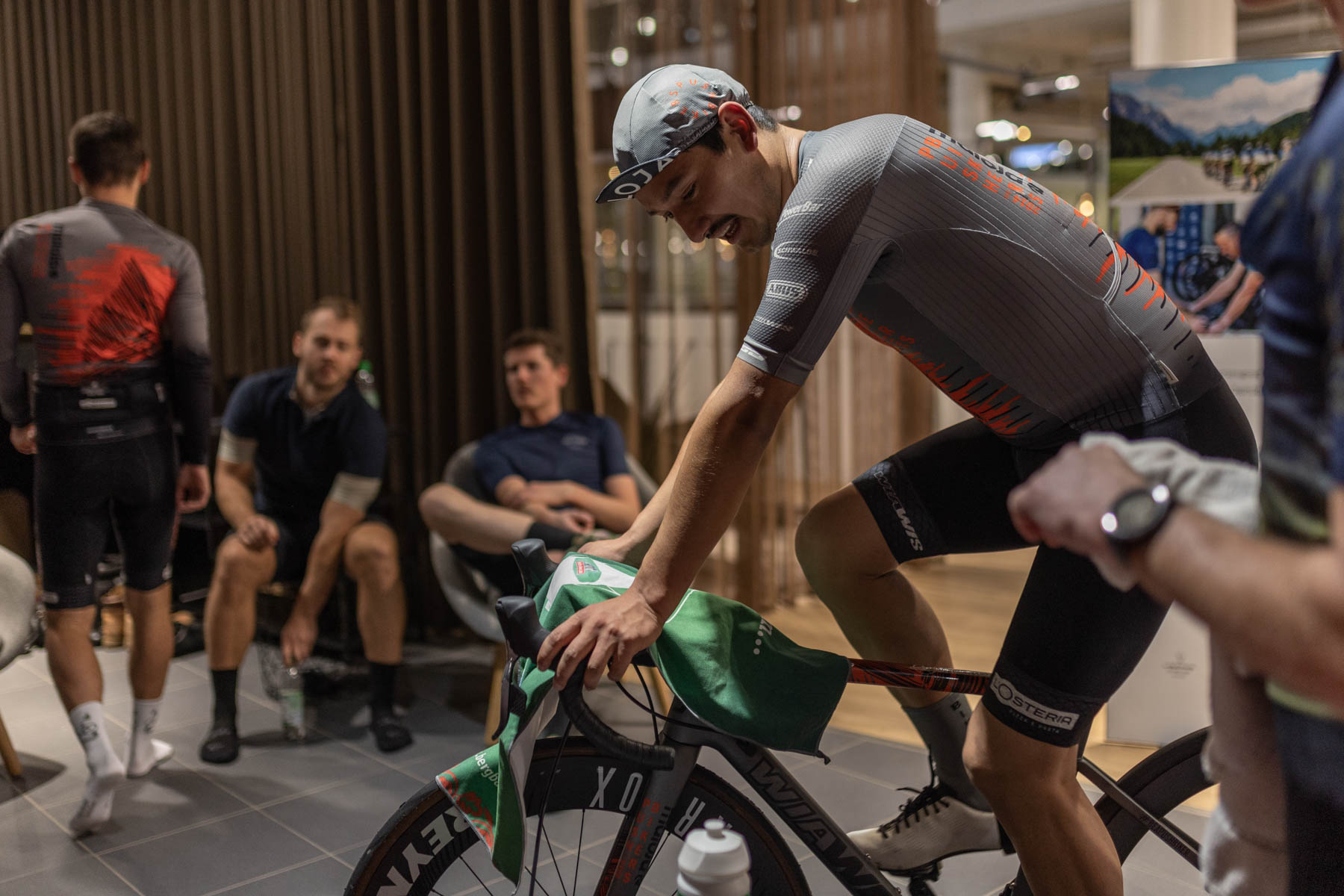 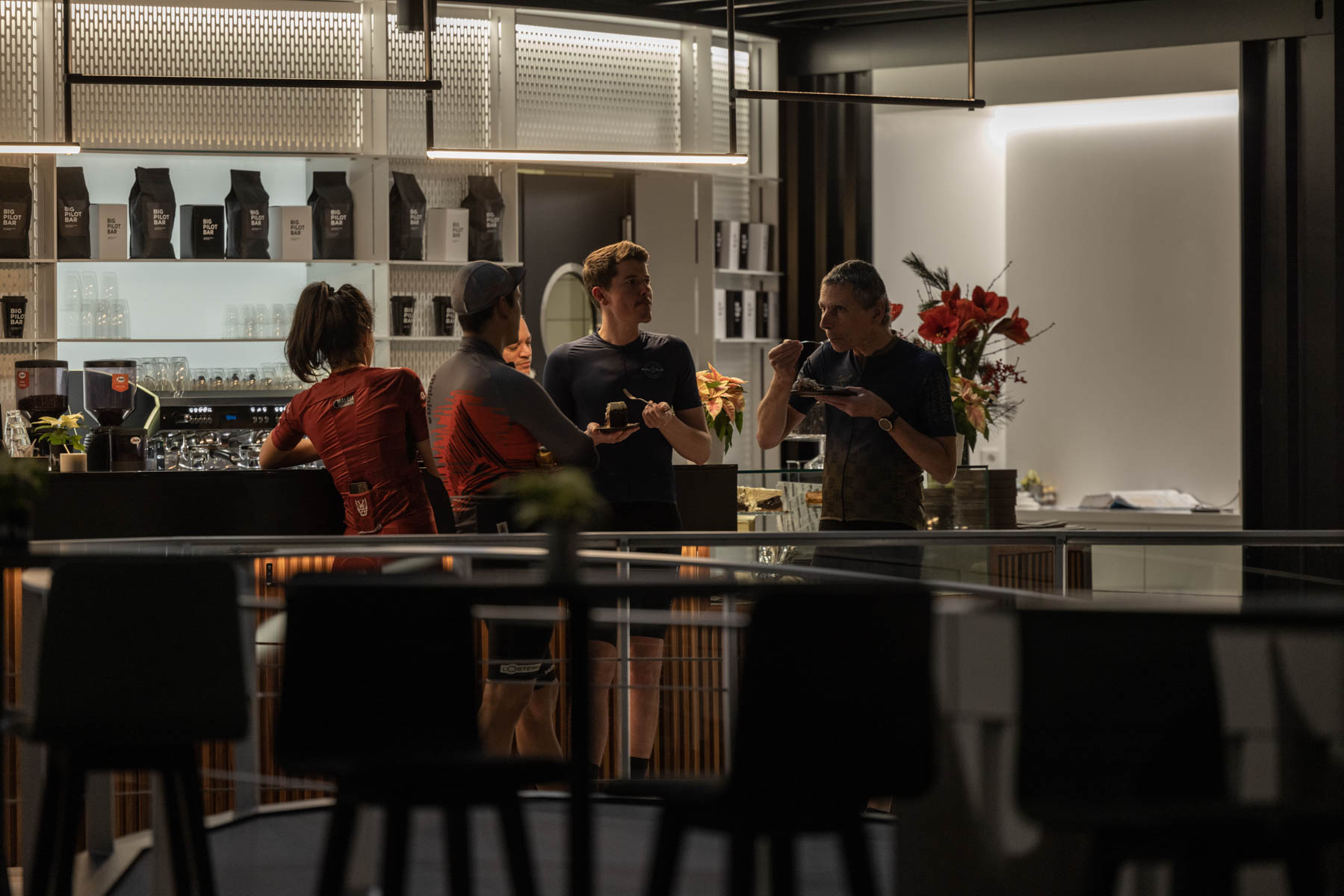 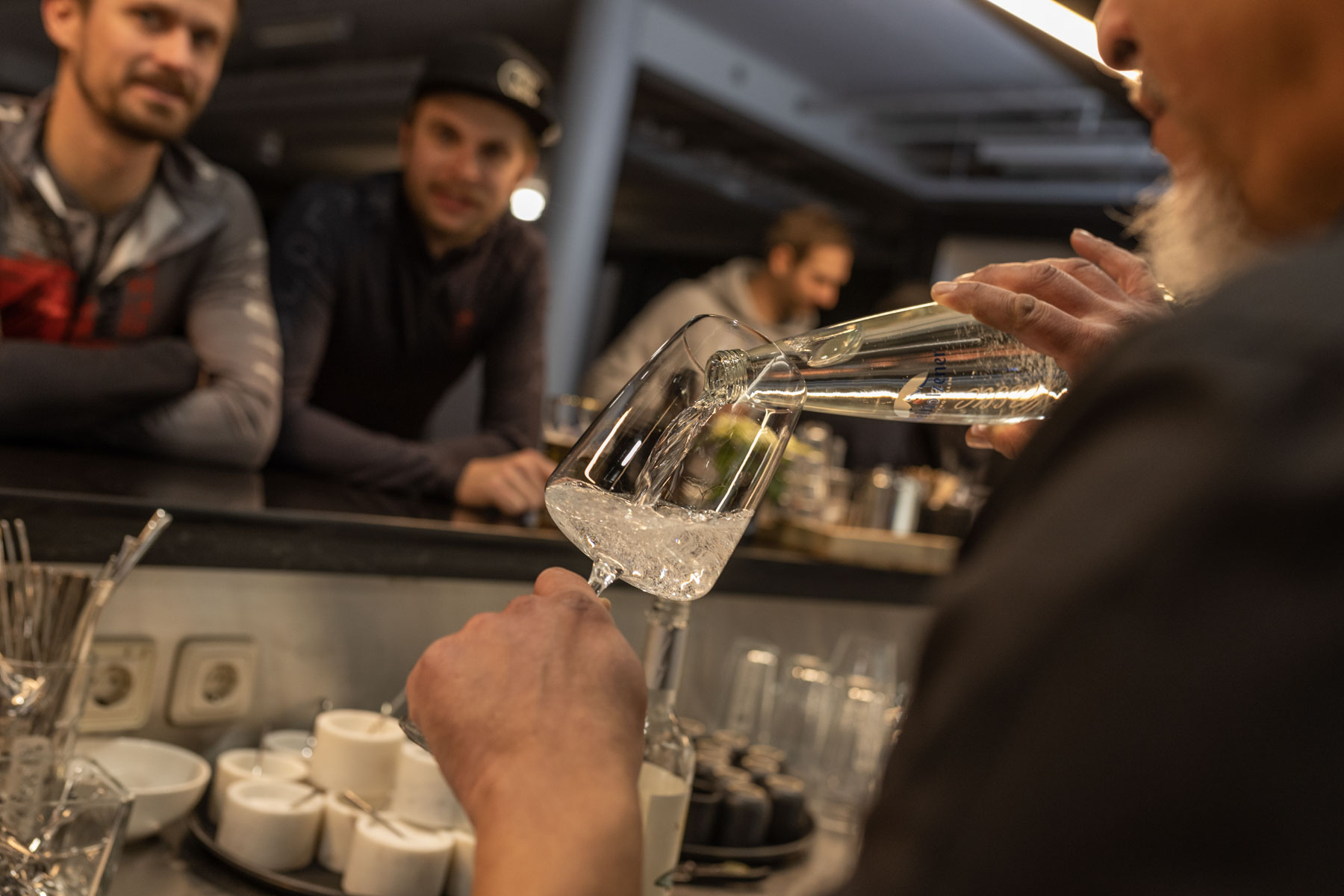 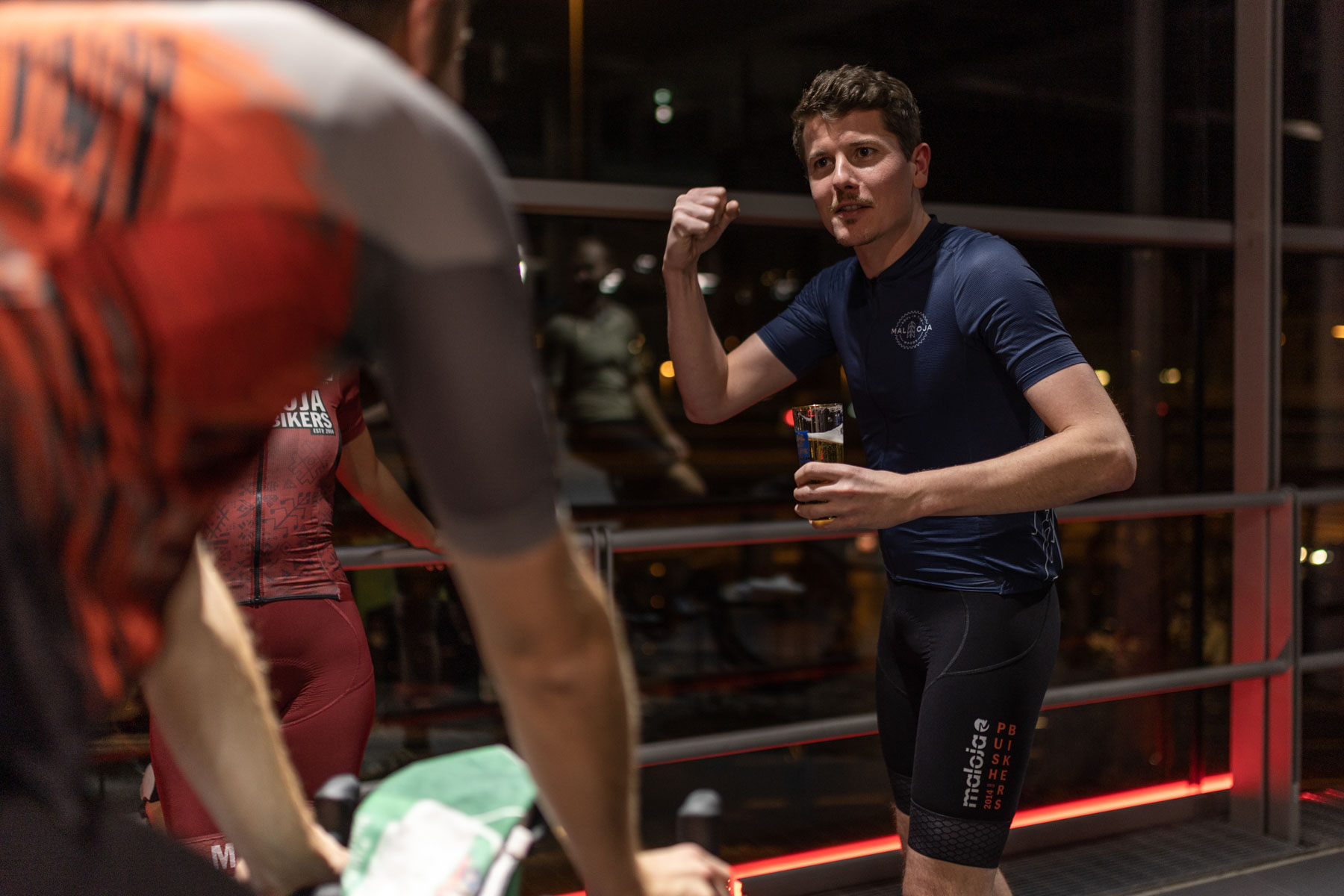 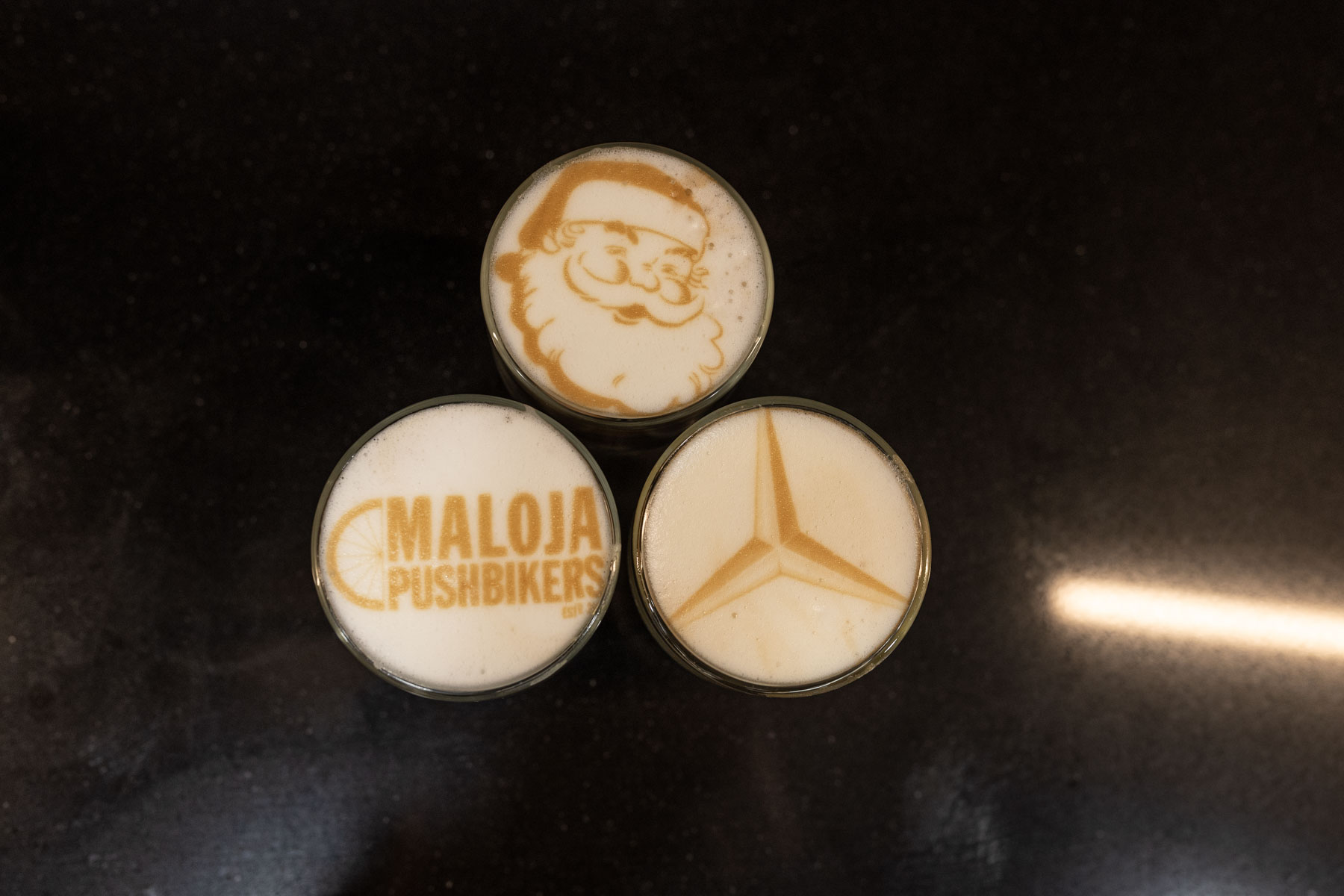 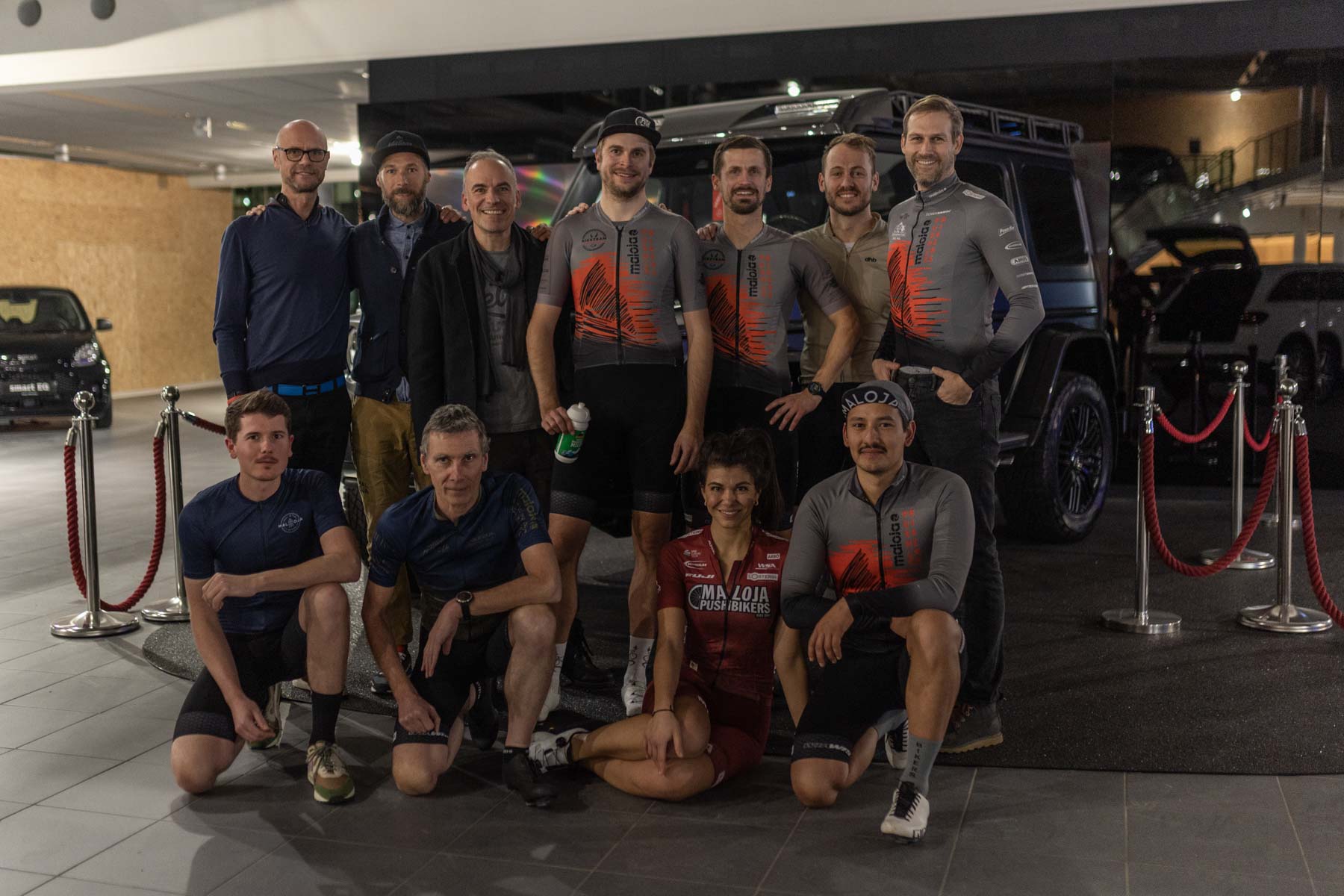 In cooperation with | Laureus Sport for GoodPhotos | Helge Roeske

← Watch: We are the Pushbikers Heroes of the future →