In five days from Belgrade to
Banjaluka. And much more

In cycling there are moments that are made to last.
We were able to experience such a moment during the Tour of Serbia.
Our first stage victory on the road.

Team Time Trial I Belgrad
“The first stage: a 4km team time trial with a relatively simple course: up and down a relatively big street in the middle of Belgrade, with two turns. Our warm-up took place directly at the course, everyone contributed their ideas, our plan was set. Daniel starts and gets us going, then Philip follows until the first turn. After the turn, everyone takes the lead until the final turn and from there we go full throttle to the finish. Experience from the track teaches us: Changes cost time, and in such a short time trial, seconds are decisive.

At the start line you could feel the tension in everyone, none of us wanted to compromise the team performance with an individual mistake. The four kilometres were brutally hard and in my last lead towards the finish I didn’t really feel anything anymore except an incredible pain in my legs.” 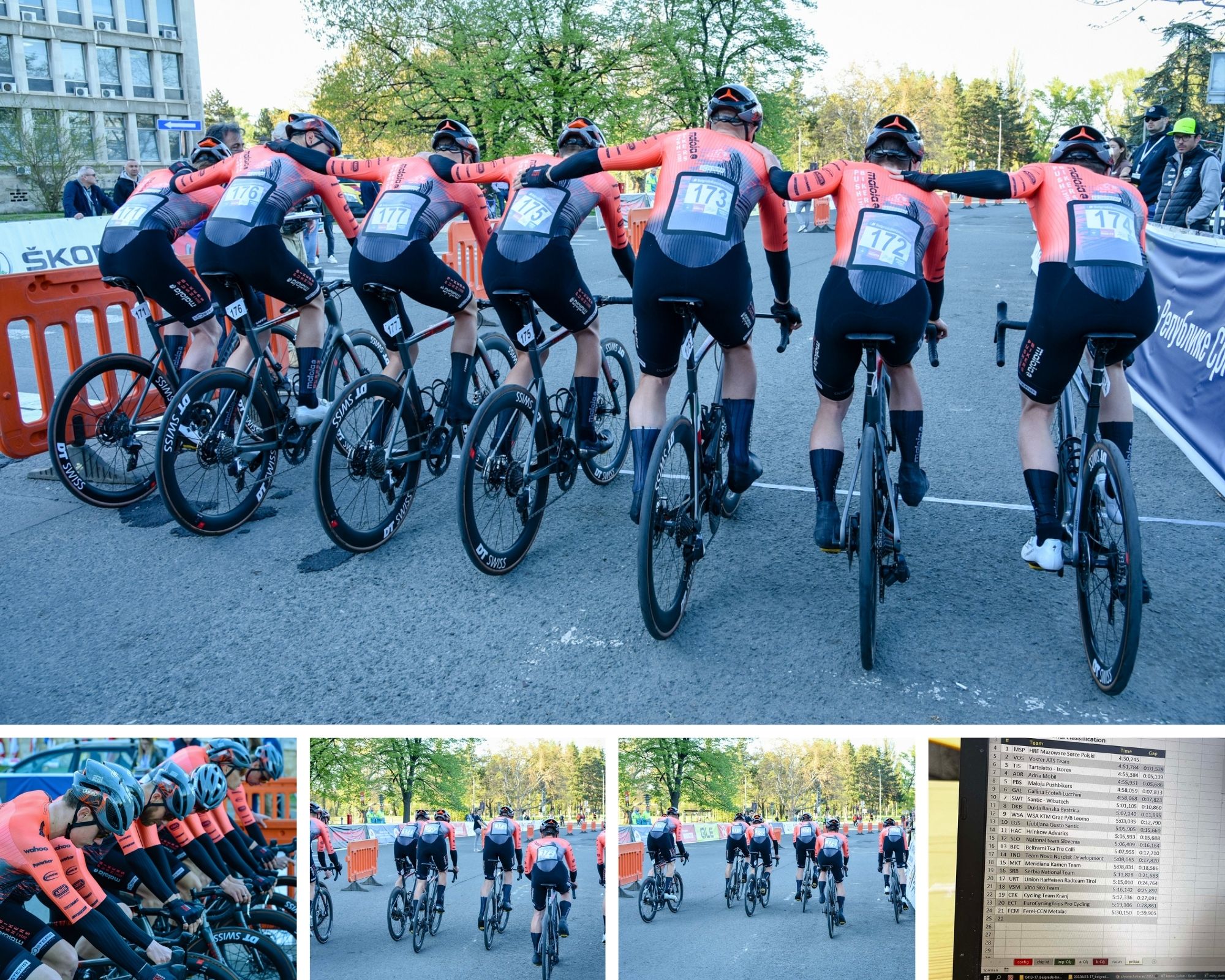 Stage 1 I Obrenovac – Bijeljina I 122 km
“I had gone to Banjaluka to win. After 5th place in the team time trial, I said to Liam on the phone: I’ll win tomorrow. We then started with the certainty that we could get a good result. The race was very fast – maybe one of the fastest of the year with an average of 49 km/h – and we were on guard all day against possible dangerous breakaways. Before the last lap we pulled together and the team put me in the best possible position.

I like this kind of finish, maybe it comes from my experience with fixed gear crits. I jumped from wheel to wheel to be in the best possible position while staying covered. I put in a long sprint and in the end that was the win. On arrival I cheered with all my teammates and staff, which was exciting. It was important for me to relieve the team with a victory and the yellow jersey, even if it was unfortunately only for one day.

The victory was a milestone. Because I am also learning to be a team leader and not “just” a sprinter. For me, this is an important step in my career that I will always take with me into the future.” 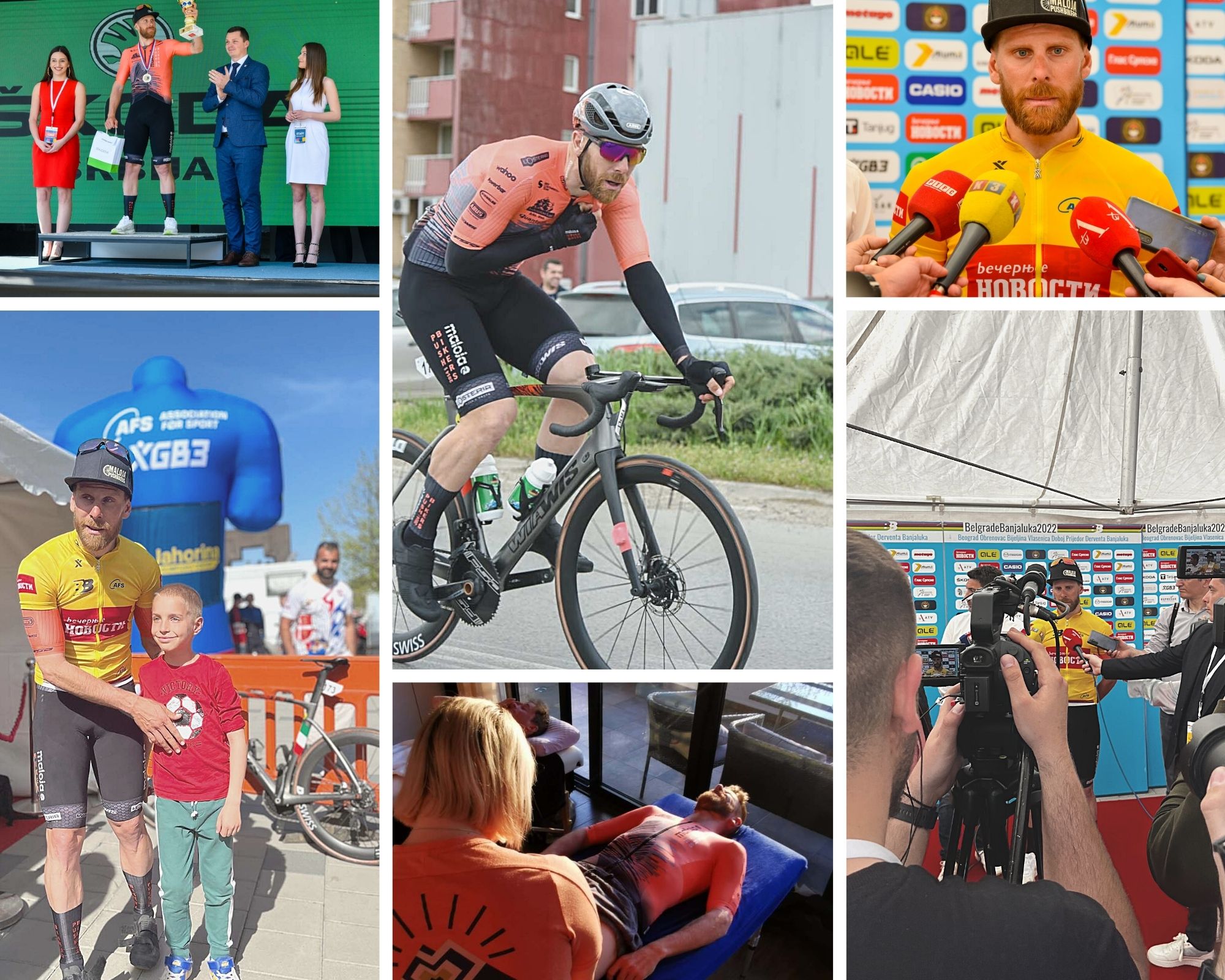 Stage 2 I Bijeljina – Vlasenica I 123 km
“On the third day we were in yellow with Pippo. It was not a completely new situation for me and I knew what to expect. At our riders meeting we made an effort to prepare together and worked out tactics. For Philipp and me it was to control the first 80 km up to the decisive mountain, everybody else spared Pippo to give him maximum support. Now Pippo is more the Cipollini type and not a climber, if the route had been different it would have all looked different. Nevertheless, we can be proud of our performance as the overall leading team.

I stepped in at short notice – but this effort was worth its weight in gold. Among us riders, a latent smile and lasting joy in the cause was the constant companion. We often sat together until late in the evening and simply had a good time. In this constellation we had exactly the spirit that a team needs to be successful together. “My team. My crew. My family” – we racers were very, very close to it.”

Stage 3 I Doboj – Prijedor I 165,5 km
“After the third day, aspiration and reality met. We started the tour with a fifth place, won the second stage with Pippo and moved into the top 10 at the end of the third stage. Now we had to defend this position in the fourth stage and bring Pippo safely into the finale.

On the mostly flat stage, we firmly expected a bunch sprint and therefore tried to control the stage as best as possible. On wide, windy roads, however, it took a good two hours before two riders broke away and we were able to take the reins in the peloton. What sounds quite unspectacular is in reality much more exhausting and nerve-racking – Paul, Phil and Daniel made sure in this first phase of the race that no dangerous group would ride away without our presence and gave everything to keep the other riders off our backs.

Surprisingly, the tide turned around 50 kilometres before the finish. Due to wind, crashes and the interests of other teams to prevent a sprint of a big group, we said goodbye to the controlled riding style. It was up to Felix and me to occupy the most important groups and keep an overview in this hectic situation. After several unsuccessful attempts, a taste of blood in our mouths, panting breathing and narrowed field of vision, then the race-deciding moment: there was a big gap between us escapees and the peloton. “Go Patrick, go!” – I hear Pippo’s energetic voice on the radio and switch over. Now it’s time to support the group as much as possible, but without putting ourselves out of the race. The next kilometres fly by. Adrenalin in the whole body; poker face when it comes to giving oneself a short breather.

In the final sprint, I look for the best rear wheel of the group, squeeze every bit of power out of me and ride to third place in the stage with a gap of only centimetres. Full of happiness, I turn around, see how Pippo also wins the sprint from the peloton and I am happy. Congratulations, a hearty team atmosphere, ice cream in the hotel room and the certainty of having taken a big step as a team before the tough cycling world surprises us again and brings us back down to earth.” 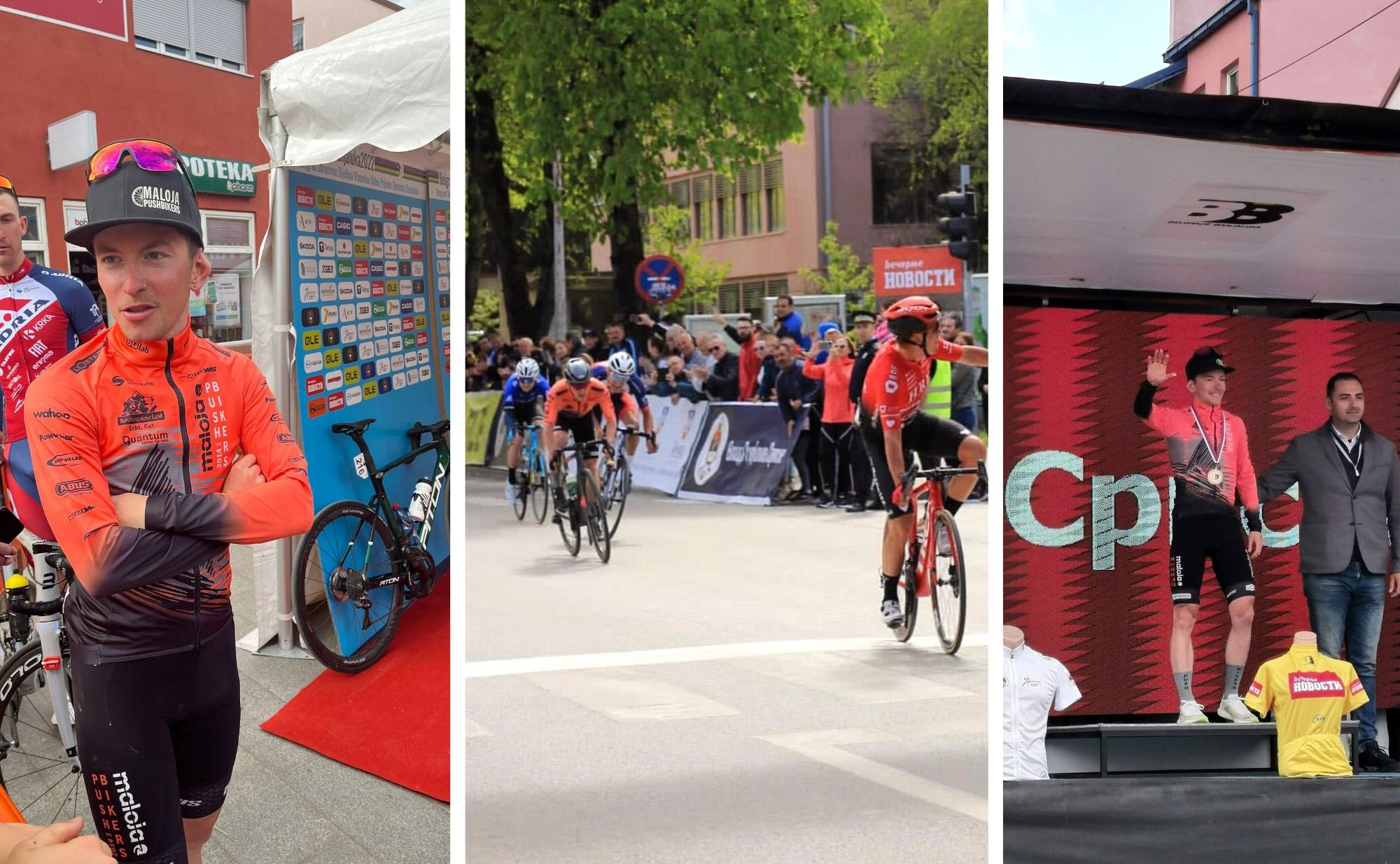 Stage 4 I Derventa – Banja Luka I 154,5 km
“The last stage was very important for us – both to keep Patrick’s position on the overall ranking and to give Pippo another chance to win another stage. Before the start I was aware that it was going to be a crazy race day due to the windy conditions – there was a high chance of crosswinds which could make the race tough and chaotic. I knew that I definitely had to be in the lead group with Pippo and get him into the final as best I could.

Shortly after the start of the stage, the peloton split in the crosswind caused by some other teams. I had Pippo on my bike and luckily our reaction time was very fast, so we soon found ourselves in the front group of 30/40 riders. We immediately looked around and saw that Phillip and Patrick had also broken away in the front group, which was exactly what we had planned.
Unfortunately, we lost Patrick in a crosswind split later in the stage. Our main focus was now on the final sprint around Pippo. Heading into the final, Phillip and I were ready to help Pippo as much as possible, but on the last lap Phil and I crashed due to a very slippery road. Luckily I was able to get back on and work at the front to launch a cheeky attack in the last few kilometres and get Pippo to the front on the last corner.

After the stage I was a bit upset that we couldn’t get the final result we wanted, but luck wasn’t 100% on our side. Overall, I’m very happy with the team’s performance during the Tour.” 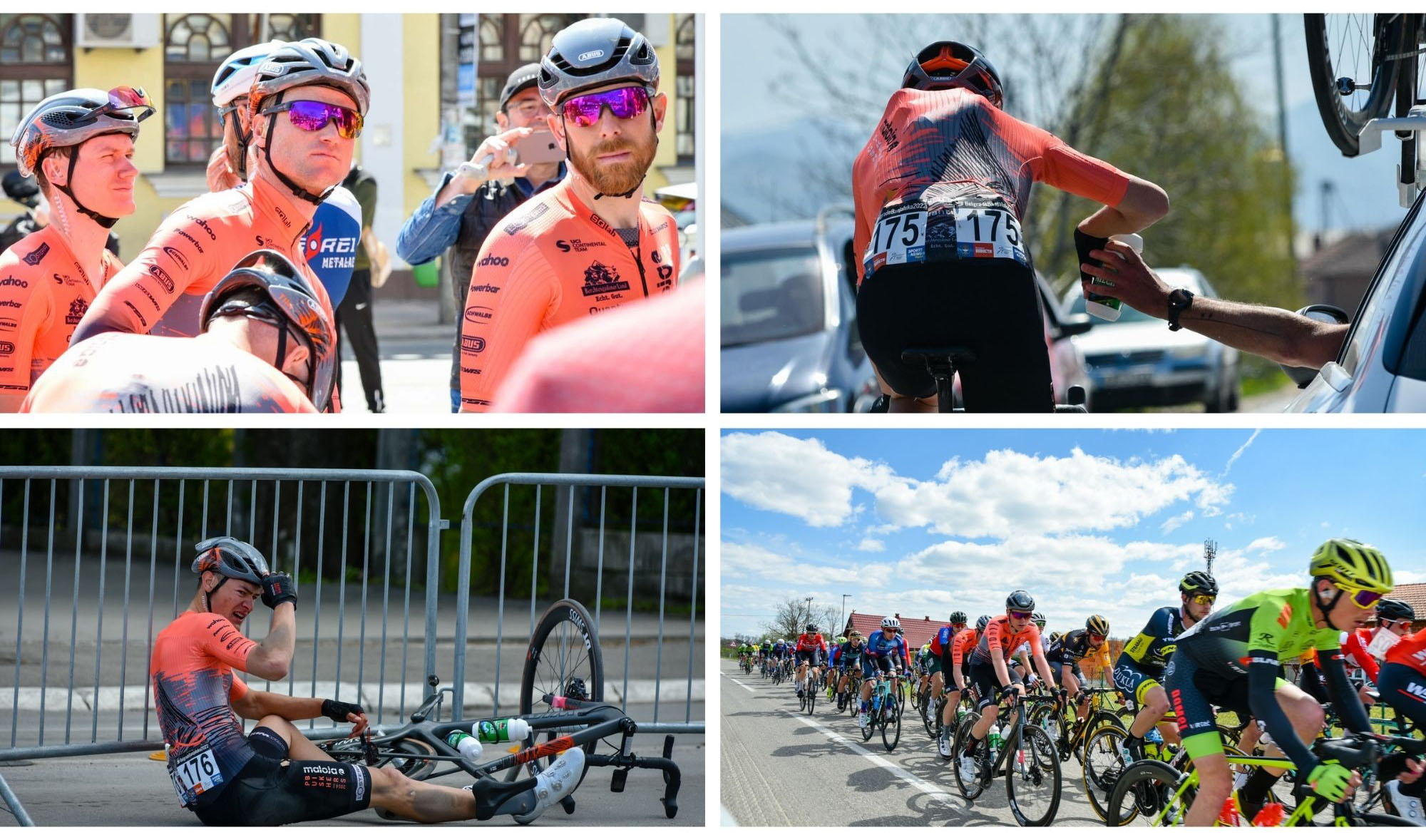 Roundabout. Behind the scenes 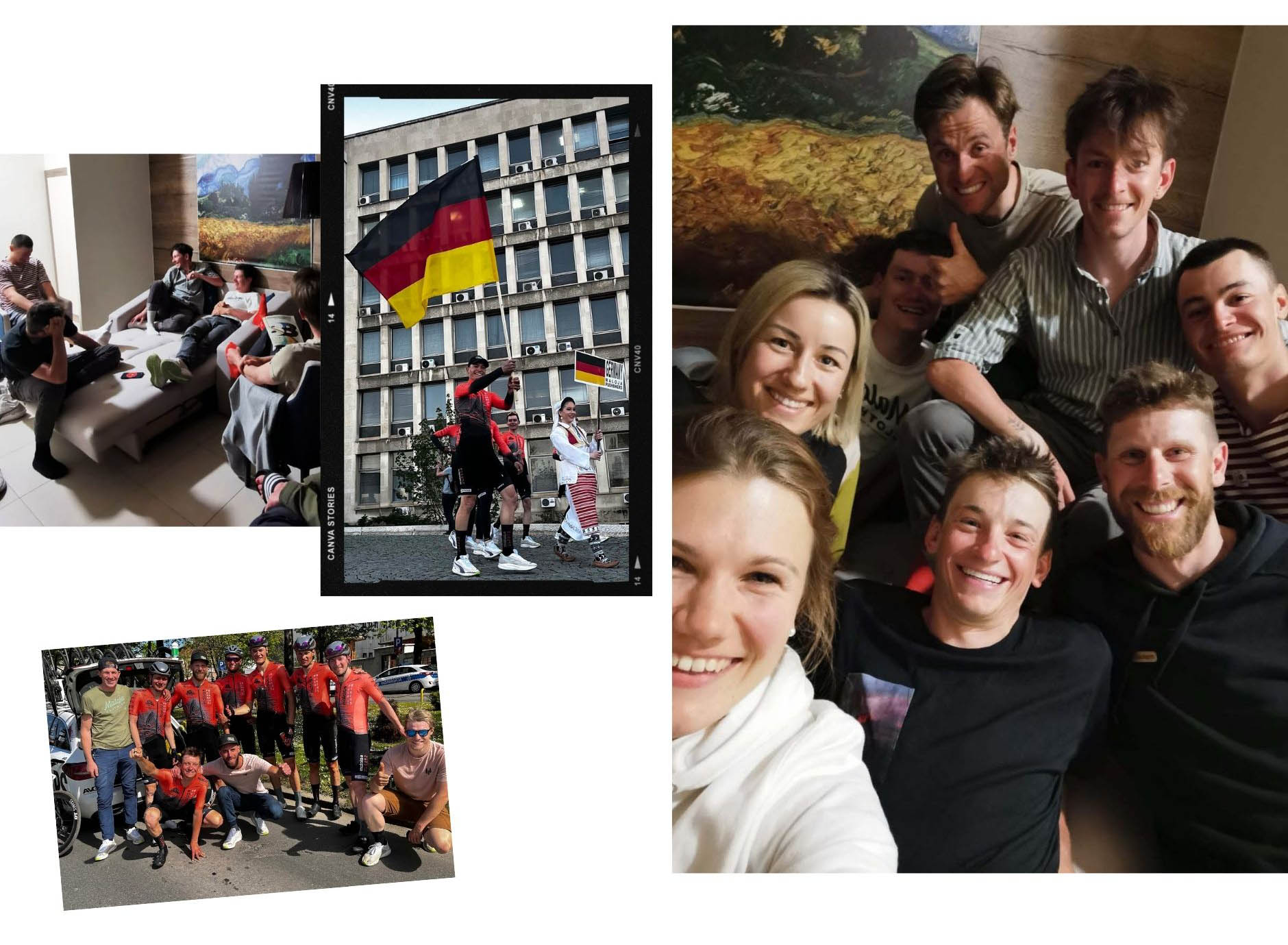 All results I Belgrad Banjaluka (UCI 2.1) I Procyclingstats